My best friend died tonight and her baby girl might be taken away from me, too, if I don’t find Lily’s father before she’s ripped out of my life and given to another family.

Unfortunately, I know who he is. He’s my best friend’s ex, and I hate him in memory and on sight.

I love this baby, but I don’t love him. Even if he does whatever it takes to make me trust him, and it seems he’s determined to do exactly that.

There’s just so little of my heart left, and I can’t—won’t—reserve any of it for that bastard, Lachlan Hayes.

A pro-football prodigy, success was laid out in golden dollar signs—until an injury so cringe-worthy it went viral laid me out for good.

Since then, I’ve discovered booze and sex, and I get both whenever I want.

Until a girl shows up at my literal doorstep, telling me about a baby I never knew I had.

As she looks at me with tears her eyes, I have a sick feeling my world is about to spin out again.

I’m in deep sh*t, because in no life plan did I think I’d raise a daughter, and I sure as hell didn’t think I’d fall in love with the woman that comes with her.

This was the first time I read this author and I have to say that I enjoyed this book. Carter is forced to give up her best friend’s baby when her friend dies. She has to find the father or give the baby to the proper authorities. The father that whose identity her friend told her just before dying. Carter not only knows the father but she hates him. Locke had no idea that he had a child and his life is kind of a mess at the moment. One huge mess that is the result of a pro football injury. Now all that is left is one angry man who suddenly has to be everything a child needs. Where to even begin?

Sounds like an amazing story right? It is, one that is full of emotion. Carter is grieving the loss of her friend and the thought of having to give up the child she has helped raise since birth. While Locke has his own demons but finding out he is a father gave him a purpose that he needed. This is the first book in the series but I can’t wait for the next.

Lily’s peering between the crib’s bars and bounces up and down upon seeing me. She’s shaky, her butt doing most of the heavy lifting with balance, but soon she’ll be wandering these halls same as Locke and I, and that’s crazy to think about.

I reach for her, lifting and then pressing her soft, wiggly body close to mine, smelling her baby-ness and wondering how much longer I’d have with her until she’s a baby no more.

“Morning, sunshine,” I say into her hair, those tiny, satin curls of hers tickling my nose.

“Guh,” she says, then rolls her r’s with a follow-up. “Burrrrrrrrrr.”

“Yes, exactly,” I say, turning to the changing station. “I think I’m starting to like your daddy, too.”

I look down at Lily, arms and legs akimbo as she refuses to sit still for a diaper change. Two times, I’ve had to spin her around on her back before she crawls off the changing table’s cliff.

I change Lily, but my mind is off, back in the room with Locke and the consequences of sleeping in that bed. Basking in the pleasure of Locke, that’s easy.

But dealing with the reality of caring about Lily’s father…that’s a responsibility better left to a girl who doesn’t give a fuck about love. 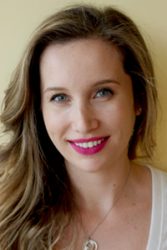 Ketley Allison has always been a romantic at heart. That passion ignited when she realized she could put those dreams into words and her soul into characters.

Ketley was born in Canada, moved to Australia when she was thirteen, to California when she was twenty, and finally to New York to attend law school, but most of that time was spent sitting in coffee shops and wine bars thinking of her next book.

Her other passions include coffee, wine, Big Macs, her cat, and her husband, possibly in that order.